Late last year, I received an ARThink South Asia Fellowship from the Goethe Institut for the year 2011-12. One of the components of the fellowship is that I get to go to Germany and work with a cultural institution of my choice to gain some first hand experience on how art institutions are run. So this is where I’m at now. For the next 4-5 weeks I’ll be based in Berlin. I’ll be on a secondment with a documentary film production company called Loupe for 3 weeks and for the remaining week and in between will be trying to meet people in the photography field.

During the time I’m in Berlin I’m supposed to record observations of my time and learning here so for the next one month this is what I’ll be doing, hopefully on a regular basis. And now, after this explanatory prologue, the first installment follows:

So after all the last minute hassles I made it to Berlin after two tiring flights with a stopover in Helsinki (see photo). Dog tired due to the lack of sleep and the bad seats I got on the flights so feeling slightly numb now even though coming back to Germany should have been a little emotional.

As an aside, some of Finnair’s ground staff at the T3 New Delhi seriously need lessons in courtesy! The lady who gave me my boarding pass was rude, uncommunicative, did not give me a seat of my choice on both the flights (I was seated in the middle next to a really fat guy on the flight to Helsinki even though I asked for aisle seating on the window side) and to top it did not even inform me that I had not got my seating of choice! I only found out after I got on to the plane. 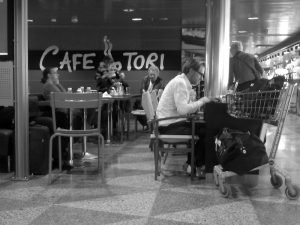 Waiting at the Helsinki Airport for a connecting flight

Moving on, for the time I’ll be in Berlin I’m sharing the flat of a German lady. It is a very nice and big place, one of those old Berlin flats with rather high ceilings having ornate work on them. The floors are wooden and make a nice creaking sound as you walk on them. The silence in the house takes a little getting used to though. I’m so used to the soothing hum of a fan while sleeping that when I was living in Germany before I bought a table fan just so I could run it for the background noise and sleep easily! I guess that won’t be possible this time so goodbye easy sleep.

The shimmering red curtains of my room!