So Manu Sharma has got life imprisonment. In passing the judgment the Delhi High Court noted that the trial court’s verdict, which had earlier acquitted Manu Sharma, was ‘perverse that made no sense and was illogical’. Following that verdict there was a national outcry. The media, sensing public outrage got into the act and newspapers swung into campaign mode. Talking heads appeared on TV and railed about miscarriage of justice and perversion of law. Ordinary middle class men and women held candle light vigils and screamed themselves hoarse that Manu Sharma had escaped because he was rich and influential. The national middle class outrage forced the powers that be to order a retrial which has led to the present conviction.

Why was the middle class up in arms over the Jessica lal case? After all, middle class militants in this country are a rarity. Thousands of women are molested, ill treated and raped throughout India every day. How come no one in the cities takes up cudgels on their behalf? Just 2 months ago two dalit women were paraded naked and raped in Khairlanji. What happened to middle class metropolitan rage then? Every year thousands of baby girls are killed? Why do the pretty faces not parade in front of the television then?

Was it because Jessica lal could have been any woman in any city in India. She was young, good looking, independent, modern, English speaking. Hell, she could have been my sister or girlfriend or neighbour. The way she lived and died could be the story of any woman living in big city India. A drunken lout, politically well connected though, shoots her point blank in a trendy bar because he is refused a drink. That could form part of the middle class nightmare. Its not very difficult to imagine because all of us like to go to trendy bars and be served by good looking women. So the middle class erupted in righteous rage because it was one of their own who was killed.

What happened to Jessica was heinous and Manu deserves the penalty he got. Its just that this case has held up a mirror to urban Indian society where we can see a reflection of ourselves, our values and what we hold dear. I wish you all a very Merry Christmas! Hope you have a wonderful time with your family and loved ones.

I’m on vacation from day after tomorrow until past new year’s. I’ll try to set up future posts if I can find the time otherwise here’s wishing you all a very Happy New Year too! Have fun and take care folks! I recently bought a Minolta 28-70/2.8 G zoom, the first and only ‘G’ glass so far in my arsenal! Minolta’s (or now Sony’s) ‘G’ series consists of top of the line lenses that are made using the highest quality optics and materials. This zoom carries with it a legendary reputation for image sharpness and bokeh so I took it out for a spin yesterday along the Rhine here. Here is one result from that shoot. I wish I had taken a tripod along as this shot would have been so much better with it. As it is there is some camera shake. I wish I could have avoided the distraction of those bright lights on the lower left but I wanted to include the human element on the lower right and therefore was forced to include the lights as well.

Through The Looking Glass II The Zen of Cycle Maintenance 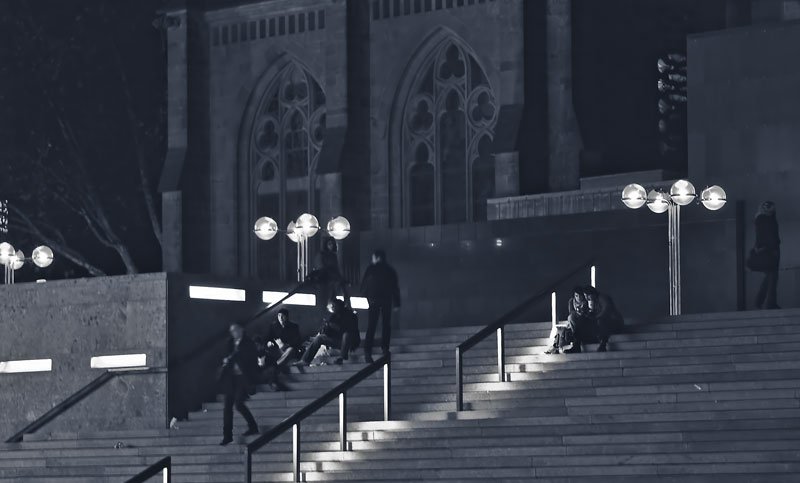